What Risk Really Is 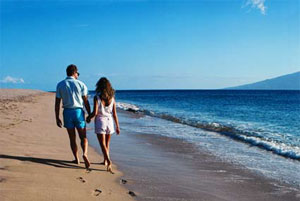 We have already seen how inflation and taxes can take a substantial bite out of investment gains. However, shouldn't a retiree seeking income invest "conservatively" in bonds and avoid "risky" stocks?

Consider two 60-year-old investors, Tim and Bill. Each retires in 1970 with $2,000,000 in assets and both require $100,000 per year to comfortably retire. At the time, they faced the following investment options:

Tim, our "conservative" investor opts for the 30-year Treasury bond. Not only does the Treasury bond yield much more than stocks, it comes with the 100% absolute guarantee of the US Government that the principal will be repaid in thirty years. The $137,400 per year in bond interest he will receive will be more than enough to fund his retirement. Not much of a choice, is there?

Bill, on the other hand, lives with the painful memory of watching his father gradually out-live his fixed retirement income a generation ago. His father was always a conservative investor and insisted on keeping his all of his substantial nest egg in bonds when he retired at age 60. Bill remembers all too well watching him cancel his membership at his beloved country club age 67, completely eliminate travel from his budget at age 72, and downsize from the retirement home he had built into a condo at age 75. By the time Bill's father passed away at age 88, he was barely able to make ends meet. Bill saw firsthand how the rising costs of his fathers' expenses (insurance, medicine, groceries, etc.) slowly but surely eroded the purchasing power of his fixed income. Because of this experience, Bill justifies accepting the lower initial income payout of stocks in exchange for participating in the growth that they have historically provided. He is more than willing to accept some short-term fluctuations in his portfolio to avoid the perils his father endured. 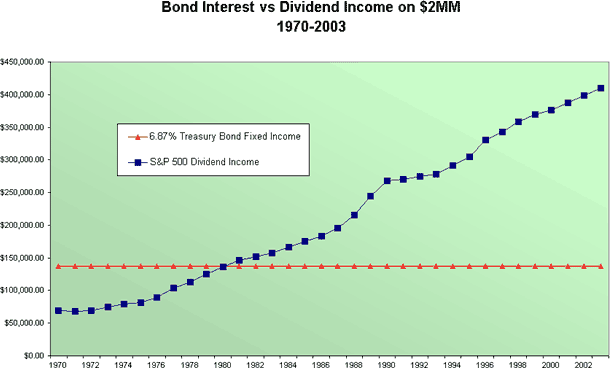 Fast-forwarding thirty-three years to 2003 reveals who took the "riskier" path. (Figure 6) In 2003 dollars, both Tim and Bill now need over $240,000 per year to maintain their same lifestyle. The bond income that was more than enough in 1970 is no longer sufficient to buy Tim's groceries, pay his medical bills, etc. As a result, Tim was forced to liquidate some of his bond shares, further reducing his income. To further complicate matters, the yield on a 10-year treasury bond in 2003 has fallen to approximately 3.5%. Tim can now only generate $67,000 by reinvesting his original $2,000,000 in today's Treasury bonds. The longer he lives, the worse his lifestyle will become. A "conservative" investment plan doomed poor Tim to a life of poverty - just like it had done to Bill's father years ago.

On the other hand, Bill's initial $2,000,000 portfolio invested in the S&P 500 index is now paying out over $400,000 per year in dividends alone - more than enough to meet his new $240,000 per year living expenses. And despite the two worst bear markets since the Great Depression (1973-74) and (2000-02), Bill's $2,000,000 initial principal is now worth well over $17,000,000. By accepting some short-term fluctuations in his portfolio, Bill has managed to secure an ever-increasing income stream that he cannot possibly outlive. That is the only real definition of financial independence. 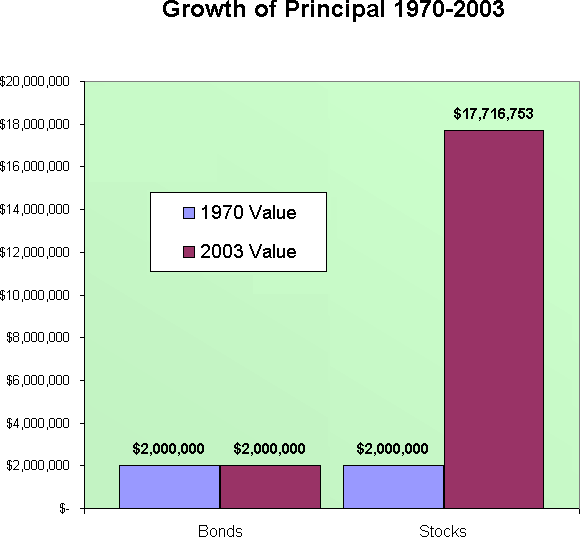 Retirees often wonder how large of a percentage of their portfolio constitutes a "safe" withdrawal rate. The answer, of course, depends on the unknowable: how long will the retiree live? We gain some valuable insight into this issue by studying the ultimate long-term retiree portfolio... endowments.

Endowments exist as perpetual sources of income for universities, foundations, and charitable organizations. These are large sums of invested money that distribute money every year for various uses. Any investment gains that are not distributed are reinvested back into the fund so as to produce an even larger income the following year. In this sense, endowments constitute the ultimate long-term retiree portfolio. Not only do these portfolios generate more and more income each year, but the principal value rises over time as well.

The key to making these distributions last forever is to limit the withdrawal rate of the portfolio to some rate less than the long-term expected return of the underlying portfolio. If the long-term portfolio growth rate is 11%, the withdrawal rate must be something less than that. Endowments also typically add a cushion to accommodate inevitable short-term investment losses. Consequently, most endowments restrict their annual distributions to 4% to 5% of the portfolio value. This is how the University of Wisconsin Endowment that was established in 1886 has been providing funding for the university for over one hundred years and will continue to do so forever.

Rather than treating their retirement funds as a finite pool to be ultimately exhausted, retirees are much better off establishing a Personal Endowment Fund for themselves and their families that is capable of funding their retirement regardless of how old he is or how long he lives.

As a practical consideration, it is often easier emotionally for retirees to invest the bulk of their retirement money in a stock portfolio, but to leave two years worth of living expenses in cash or short-term instruments. This creates a Bear Market emergency fund can be used to fund retirement during the next prolonged down market. This alleviates the emotional stress that accompanies taking portfolio withdrawals from a portfolio that has temporarily declined in value. Investors who acknowledge that bear markets are a normal, healthy part of investing in stocks are well equipped to deal with them - even in retirement.