Investors often find themselves confused by the myriad of investment products and services available today--mutual funds, annuities, insurance products, wrap accounts, etc. Confusion causes indecision. And indecision causes poor investment results. A recent Dalbar study confirmed what we have known for years: The actual investment return achieved by most investors is abysmal. Even during one of the most profitable periods for the stocks in recent U.S. history, the average equity investor's performance trailed not only that of the S&P 500 index, but also that of a One Year Treasury Bill. Without a disciplined investment approach, investors are doomed to fail before they even begin. 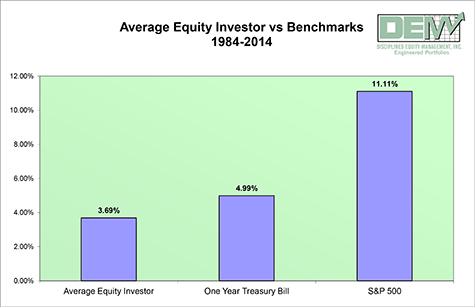 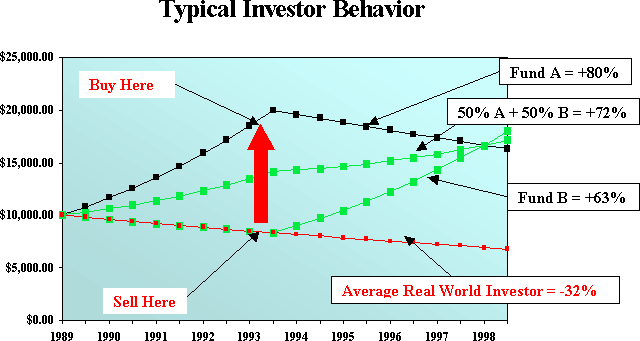 However, when we analyzed a real world 401k plan similar to this one, we found that most participants actually lost money in their accounts over the 10-year period. How could this have happened? We found that most investors had put all of their money in Fund A initially because, at the time, it had a higher trailing five-year return than Fund B. These Fund A investors held onto this fund as it lost money for one year, two years, and three years in a row. But notice, all the time that Fund A was losing money, Fund B was making quite a bit of money. The participants noticed this as well. Because they lacked a discipline investment plan from the outset, somewhere around year four or five most Fund A investors sold their "under performing" Fund A and purchased the "outperforming" Fund B. (Sadly, this is exactly the type of advice that investment professionals typically give to their clients: "sell your laggards and buy the leaders".)

As you can see, right about this same time, Fund B started its own multi-year period of underperformance. At the end of ten years, most participants ended up owning Fund A during its worst stretch of performance, and then owned Fund B during its worse stretch of performance. It was not their lack of knowledge, but their lack of a discipline that doomed these investors to fail. Unfortunately, we see it happen all of the time.

Given the four outcomes described above, most investors would prefer the diversified portfolio containing both Fund A and Fund B. Intelligent investors intentionally construct our portfolios using multiple investment styles that tend to zig while others zag. This gives the overall portfolio a more consistent return with loss volatility. It is much more important to construct a portfolio with components that behave differently than it is to try to predict which investments will be the best performing in the future.